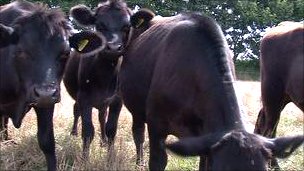 Date: 22/04/2013 | Posted by John Garton
Great British Beef Week takes place from 21 to 27 April with the purpose of promoting the versatility of home-produced beef and to encourage people to eat it as part of a balanced diet. It is being supported by national supermarket chains, independent butchers and farm shops and industry organisations. Following the discovery of horsemeat in beef products earlier this year, the British beef industry has stepped up efforts to promote the provenance and quality of home-reared beef – and in the most southerly of the British Isles it doesn’t get more local than Jersey Angus! Two years after the first Jersey Angus went on sale, opening a new chapter in the Island’s rural history, it is sought out by local chefs and Islanders because of the quality of the meat.  While local supplies are not able to entirely satisfy local demand for fresh beef, it has widened the choice available to Jersey consumers who want to support the local economy by buying local produce.

The Chief Executive of Genuine Jersey, John Garton, said: ‘The quality of locally produced Jersey Angus makes it a premium product which over the past two years has become increasingly popular in the local market.’

Darren and Julia Quénault of Classic Herd in St Peter are independent dairy farmers and beef and pork producers. They have been producing Jersey Angus for two years and Jersey Angus Rose veal since 2010. In addition they are hoping to build up a herd of Jersey British Blue following the birth of the first cross breed calf earlier this year, to further satisfy the growing demand for locally produced beef.

Mr Quénault said sales of Jersey Angus had grown steadily and they now sell it on a daily basis, with sirloin being the most popular cut.

‘The quality is first class and the taste isn’t as strong as pure Jersey beef which makes it easier on the palette. Islanders used to eating pure Jersey beef have had to adjust their taste buds as the flavour is more delicate and the fat is whiter - but the steaks are bigger!’ he said.

This new rural industry came about because of changes in legislation relating to the Island Herd which now allows for the importation of semen to strengthen the breed and its dairy production. In addition, it has enabled dairy farmers to develop a niche meat product achieved by crossing Aberdeen Angus with the Jersey so the Aberdeen adds body and taste to produce a very impressive beef. This cross breeding poses no threat to the world-renowned status of the Island herd as Jersey Angus animals are produced from the dairy cows not used to breed dairy herd replacements.