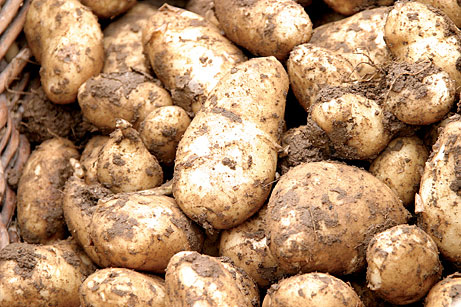 Top of the Crop

Date: 13/05/2011 | Posted by John Garton
The Island’s premier crop, the Jersey Royal potato, will be the talking point among Island children next week as judging takes place to discover the winners of this year’s Genuine Jersey Royal potato growing competition.

Now in its fifth year, the popular primary schools competition is organised by the Jersey Royal Company, supported by the Genuine Jersey Products Association and the States of Jersey Health Promotion Unit. This year it coincides with the first Jersey Food Festival, a weeklong celebration of the Island’s three essential produce – the Jersey Royal new potato, seafood and dairy.

As well as the schools competition, all the Constables have competed in the second parochial challenge to see which parish can grow the top bumper crop, while the hotly contested competition between the local media is in its third year.  Media champion in 2009 and 2010, the Jersey Evening Post Newsdesk, is aiming for a hat trick.

Jersey Royal Company’s commercial manager William Church said they were delighted with yet another record-breaking crop of entries.

‘It is most rewarding to see so many children taking part and learning how important the Jersey Royal is to the Island’s rural and cultural heritage and economy at a time when this year’s crop is at its peak.  Our work in the schools alongside the Health Promotion Unit has become an important and enjoyable part of the curriculum as it also teaches the children the importance of healthy eating among other topics,’ he said.’

The winners will be announced on Friday 20 May at a special event being held at the RJAHS headquarters in Trinity, starting at 11 am, where live judging of the Constables’ and media entries will take place

For the first time, the judging event will be open to the public as part of the Jersey Food Festival. Mr Church will present the prizes to the lucky winners of all three competitions.

The Chief Executive of the Genuine Jersey Products Association, John Garton said he was delighted to again support the competition, and particularly so as it was an important part of the Jersey Food Festival.

‘This week, as the Jersey Food Festival celebrates the Island’s reputation for premium produce, is an important time  for local producers to showcase the best the Island has to offer. The Jersey Royal Company does a fantastic job in promoting the Jersey Royal as our major export crop, but their association with Education and primary schools through the competition is as equally important as it reinforces the importance of the rural economy to Island life,’ he said.

Entries have grown considerably since the first competition was held in 2007 when 75 classes from 19 schools competed. This year 212 classes from 28 primary schools entered, compared to 2010 when 191 classes from 26 schools took part. The classes have been growing potatoes in buckets and studying Jersey Royals since growing kits were distributed back in January.

The schools competition is designed to teach pupils about more than Jersey Royals and potatoes as a staple food. It also shows how things grow, where food comes from, the history of the Jersey Royal and the importance of a balanced healthy diet. Since January the 218 competing classes have been involved in nurturing the plants and learning about related topics in geography, history, science, English and maths classes.

Mr Church said: ‘We are looking forward to seeing who emerges as the winners in all three competitions in what has become a truly Islandwide contest which has generated community interest in this year’s crop, as well as being a fun experience for all the competitors.’

The winners of the 2010 competitions were St Lawrence and JCG Prep in the schools category, Constables Ken Vibert (St Ouen) and John Gallichan (Trinity) and in the media contest, the JEP.