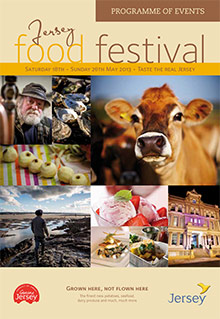 Taste the Real Jersey at the Jersey Food Festival

Date: 21/05/2013 | Posted by John Garton
Enjoy Jersey hospitality and the very best produce the Island has to offer during the Jersey Food Festival; a week-long celebration of the Jersey Royal new potato, bountiful fresh seafood and award-winning dairy produce for which the Island is justifiably famous.

The festival, which is now in its third year, runs from Saturday 18th to Sunday 26th May and will be launched in the Central and Fish Markets on the first Saturday (18th May) as market traders join together to celebrate the Island’s tradition of public markets.  A farm and craft market will also be held on the same day in the Royal Square - Place du Marché – until two centuries ago, the town’s public market place.

The event, organised by Jersey Tourism and supported by the Genuine Jersey Products Association, features some of the very best foodie people in the Island sharing their passions and showing the best ways to use local produce.

Jersey Tourism’s Development Manager Donna Le Marrec said: “Our festival is all about food related experiences and visitors can enjoy a diverse range of activities across the Island over the course of nine days. We believe that we can put Jersey on the map when it comes to our food offering – we have the most amazing people working in the food industry and we are lucky to have so much to offer.”

John Garton, CEO of the Genuine Jersey Products Association said “The Festival gives Members the perfect platform to showcase their produce and offers residents and visitors the opportunity to get a better understanding of what they do and why.  During the week the Association is hosting a tour of both its sea and land related producer members.  In addition, all the Island’s primary schools will be visited by independent judges to see which class (from a total of 250), has grown the heaviest weight or greatest number of Jersey Royals with the winner being announced at an award ceremony at Grouville Parish Hall on Friday 24th May where we will also find out which Constable and representative of the Island’s media have won the Genuine Jersey Royal Potato Growing Competition!”

Throughout the week, food lovers can enjoy farm and wine tours, low water walks and producer tours culminating in an al fresco food seafood paella event at the White House in St Ouen’s Bay – Le Don Hilton.  Other highlights include fine dining in Michelin starred restaurants, foraging, food and ale trails, tutored tastings, brewery and dairy tours, chocolate making, foodie films in the cinema at the Grand Jersey, traditional afternoon tea as well as a ‘cider and sausage’ evening under the stars in the apple orchard at The Elms, headquarters of the National Trust for Jersey.

The festival programme is available from Jersey Tourism and participating organisations, and is available to view online or download as a pdf here: Food Festival Programme.