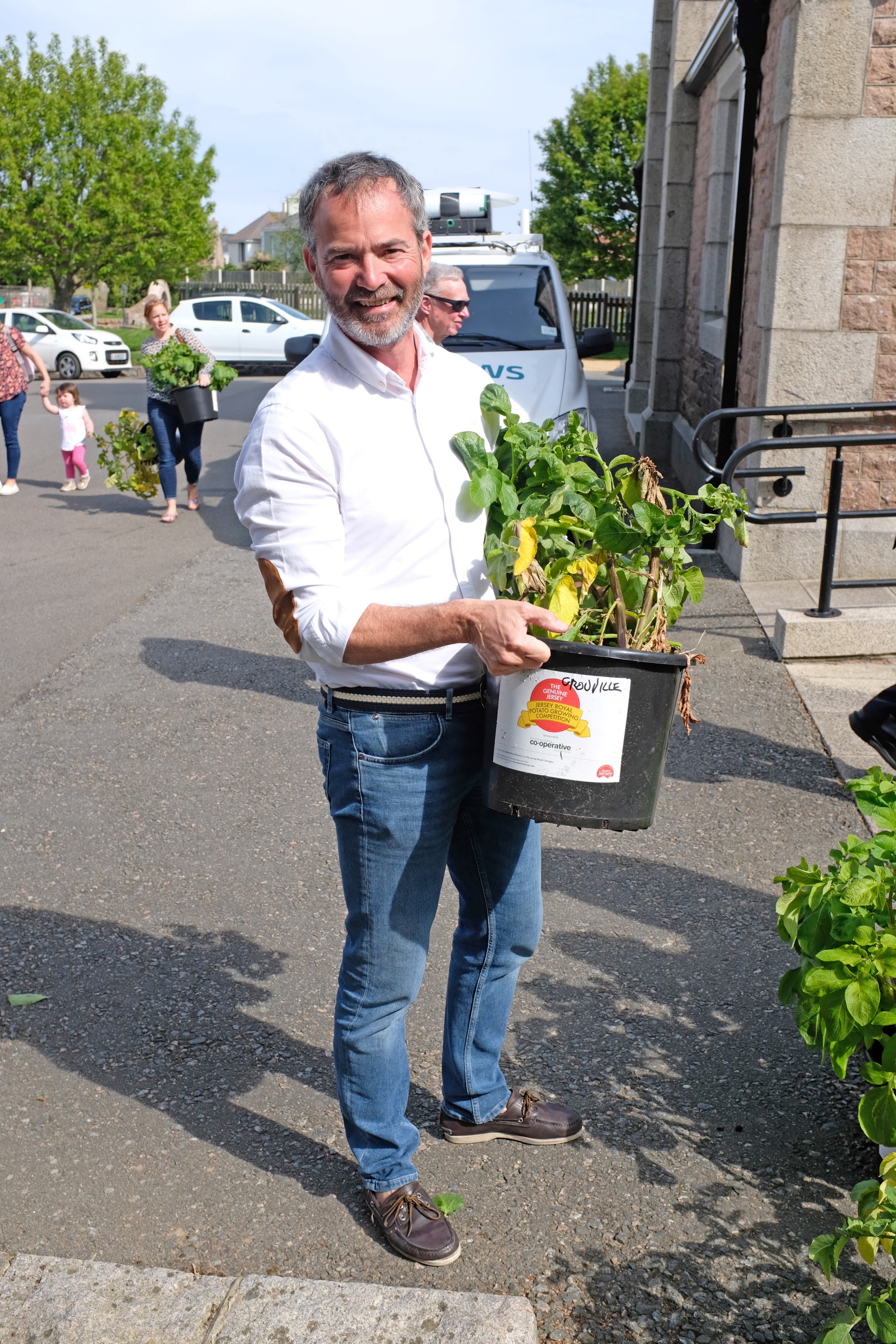 Results are in for the 2019 Genuine Jersey potato growing competition sponsored by The Channel Islands Co-operative Society and have produced the most successful yields on record since the event started in 2006.

Spirits were high during the al-fresco weigh in at St Ouen’s Parish Hall, where record yields were achieved. Starting in late January, schools, media, the Women’s Institute, Connetables and teams from social services have been nurturing their seed potatoes provided by The Jersey Royal Company, in a bid for potato growing glory.

John Garton, Chief Executive Officer of Genuine Jersey, said: “Each year at the weigh in, there is a wonderful sense of pride from all competitors. Whether a bucket has 10 potatoes or 60, it is clear to see that entrants have found joy in growing their potatoes and are always excited to see what the next bucket reveals. The Jersey Royal really is the star of the show!”

In the school’s competition, which involved all 32 primary schools, St Christopher’s won the heaviest crop award, with Pre-Reception coming in at a weighty 2.362kg. Runners up were Year two at First Tower School with 1.768kg. Year three at Trinity Primary won the schools’ most tubers competition with 69, closely followed by runner up Grouville Nursery with 67.

St Clement’s Connetable, Len Norman, swept the board in the Connetables competition yielding a bucket of 66 tubers at a weight of 1.726kg and went home with a double win.

In the media competition, Gallery Magazine won the heaviest crop award at 1.505kg and business magazine Connect came in on top with the most tubers, yielding 56 potatoes. BBC achieved second place in both categories with 50 tubers weighing in at 1.036kg.

None of the results compared to the efforts of the Women’s Institute which was won by Linda Le Brocq of St Ouen with 78 tubers at a weight of 2.201kg.

This year, the competition received great take up from the teams at health and social services.  In competition with 10 other teams, Maple Ward won both the heaviest crop and most-tubers award, their yield weighing in at 0.953kg with an impressive 57 potatoes.

With support from the main sponsor The Channel Islands Co-operative Society, the Genuine Jersey Products Association is set to bring bite sized buckets of Jersey farming to the attention of Islanders once again, for the competitions 14th year in January 2020.

John said: “It is encouraging to see more and more people get involved with the competition each year and I am keen to see how the event will progress for 2020. Jersey farming and the Jersey Royal are quintessential to Island life and the potato growing competition remains a fantastic opportunity to celebrate this.”

Class growing the most tubers in one bucket:

Class growing the heaviest weight of tubers in one bucket:

School with the highest average number of tubers per bucket:

WINNER – GROUVILLE SCHOOL with an average of 48 tubers per bucket

School with the highest average weight of tubers per bucket:

WINNER – LES LANDES SCHOOL with an average weight per bucket of 1,341.7 grammes

RUNNER-UP – MONT A L’ABBE SCHOOL with an average weight per bucket of 1,120.3 grammes