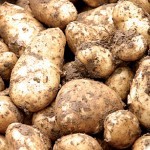 Over four days from Monday 19 May, the judges will be visiting all the primary schools to weigh and count the crops grown in buckets since February by more than 6,850 children children in 274 classes.

Last year’s winners, Grouville School, will greet the judges next Thursday in their usual special way with almost 400 pupils assembled outside – weather permitting. The 16 classes will gather around the judges as they empty and weigh each bucket. However, while the school will know which class has won, the children will have to wait a day to discover if they have repeated last year’s success.

Head teacher Pam Pitman said:  “We see the Genuine Jersey Royal Potato Growing Competition as a great opportunity to take part in a competition that it is a fantastic community event and lots of fun.  The children plant their potatoes and then care for them on a daily basis.  Knowing that they have looked after them as best they can, is very important to the children; that is why there is lots of excitement on the judging morning when the children find out if their daily care has been successful in enabling them to get the ‘best crop”.

It is not just young Islanders who are awaiting the results; the Constables have taken part while in the media competition Jepson the JEP bear, JEP reporter Ellis Wall, Sara Palmer of BBC Radio Jersey, 103 FM, ITV Channel, Rural Jersey, Gallery,  Connect and Bailiwick Express have been busy tending their micro crops for the past three months.

Each competitor or class received a growing kit in February comprising two Jersey Royal seed potatoes a container, polystyrene chips, compost and fertiliser. Crops are judged on weight and the number of tubers and schools can also enter course work.

The winners will be announced at the Constables and Media Grand Weigh-In at St Mary’s Parish Hall from 10.30 am on Friday 23 May. The event is part of the Jersey Tourism organised Jersey Food Festival - which runs from 23 to 26 May - and is open to the public.

The schools competition is designed to teach pupils about more than just growing potatoes; it also shows where food comes from, tells the history of the Jersey Royal and the importance of a balanced healthy diet.

The Chief Executive of Genuine Jersey, John Garton, said it was fantastic that more children than ever had taken part in celebrating the Island’s premier crop.

‘May is the first month of the year when fresh local produce is available in abundance so what better time to celebrate the iconic Jersey Royal with the culmination of the competition, and as part of the Jersey Food Festival which celebrates the not just Jersey Royals but the Island’s dairy products and seafood for which the Island is renowned worldwide,’ he said.

For the full Jersey Food Festival programme go to: www.jersey.com/foodfestival