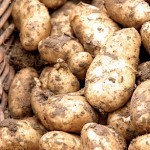 The competition is organised by the Genuine Jersey Products Association and sponsored by Belles Fleurs Nursery, and is supported by the States of Jersey Public Health Department.

The Constables and Island media are also being invited to compete again in hotly-contested and entertaining challenges. All the competitors will be judged at the end of May, as part of the Jersey Food Festival.

The Chief Executive of Genuine Jersey Products Association, John Garton, said since the competition was first held in 2007, it had captured the imagination of young Islanders.

‘It never ceases to amaze me how enthusiastic the children are from when we deliver the growing kits in February, to May when the judges visit each school to weigh the crops. In the first year it was organised, 2007, 1,875 pupils from 75 classes took part and by last year those numbers had grown significantly to around 6,450 children from 258 classes. Those figures speak volumes about young Islanders interest in growing potatoes and learning about the historical and cultural importance of the Jersey Royal,’ he said.

The schools’ competition incorporates specific studies over the three-month growing period learning how plants grow, where food comes from, understanding the history of the Jersey Royal and the importance of eating a balanced healthy diet. To support their entries, schools are invited to submit written work which in the past has involved projects in English, history, geography, science, mathematics and even music.