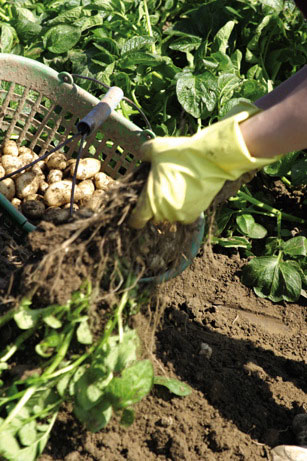 All primary schools on the island have signed up to compete in the 2014 Genuine Jersey Royal Potato Growing Competition to see which class can grow the heaviest crop of the Island’s world-renowned potato. They also get to learn about the health-giving properties of a balanced diet based on fresh local produce when it is at its seasonal best.

Now in its eighth year, this popular highlight in the primary curriculum attracts more entries year on year. In 2013 about 6,450 children from 258 classes in all the primary schools competed between February and May, with Grouville growing the heaviest and highest crop yield and St Lawrence producing the best course work.

The competition is organised by the Genuine Jersey Products Association and sponsored by Belles Fleurs Nursery, and is supported by the States of Jersey Public Health Department.

The Constables and Island media were also invited to compete again in hotly-contested and entertaining challenges. All the parish Constables have agreed to take part this year, and the members of the media competing will be: Jersey Evening Post Features, Jersey Evening Post Newsdesk, BBC Jersey, Gallery, Rural Jersey, Connect, 103 FM, ITV and Bailiwick. All the competitors will be judged at the end of May, as part of the Jersey Food Festival.

The Chief Executive of Genuine Jersey Products Association, John Garton, said since the competition was first held in 2007, it had captured the imagination of young Islanders.

‘It never ceases to amaze me how enthusiastic the children are from when we deliver the growing kits in February, to May when the judges visit each school to weigh the crops. In the first year it was organised, 2007, 1,875 pupils from 75 classes took part and by last year those numbers had grown significantly to around 6,450 children from 258 classes. Those figures speak volumes about young Islanders interest in growing potatoes and learning about the historical and cultural importance of the Jersey Royal,’ he said.

The schools’ competition incorporates specific studies over the three-month growing period learning how plants grow, where food comes from, understanding the history of the Jersey Royal and the importance of eating a balanced healthy diet. To support their entries, schools are invited to submit written work which in the past has involved projects in English, history, geography, science, mathematics and even music.

Each class receives a growing kit comprising two Jersey Royal seed potatoes a container, polystyrene chips, compost and fertiliser – and  a bucket to grown them in.

The Constables and media entries are judged in two categories: overall weight and the number of tubers grown.  Last year St Mary and Trinity shared the parochial honours with Connect and Rural Jersey taking the media titles.