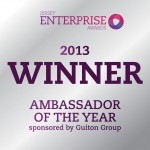 Flying the flag for Jersey

The awards celebrate the entrepreneurship and resilience demonstrated by the large numbers of Jersey businesses which contribute to both the Island’s economy and community on a daily basis.

The Ambassador of the Year award is made by the Guiton Group, which publishes daily and weekly newspapers in Jersey and Guernsey including the flagship publications, the Jersey Evening Post and the Guernsey Press.

In announcing the award, the Chief Executive of the Guiton Group, John Averty, said the judges decided to recognise the association as it was ‘flying the flag both here and overseas for Jersey producers, and its reach had stretched far beyond our Island’s shores.’

In accepting the award, the Chairman of Genuine Jersey, Jim Hopley, said the success of the Association was down to the efforts of members and not individuals.