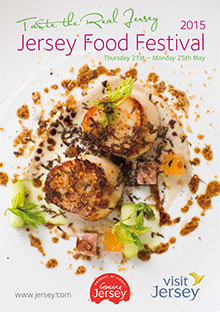 The Jersey Food Festival returns this week to showcase the very best local produce and talent that the Island has to offer.

It also offers Islanders and visitors alike the chance to explore Jersey’s coast and countryside in the company of producers, farmers and fishermen.

The Festival begins on Thursday and ends on Bank Holiday Monday. Over the five days, Festival-goers are in for an action-packed long weekend, with ale trails for the thirsty, low-water rambling for the curious and wild food foraging for the brave!

Other events include Cider and Supper at the Elms, a Genuine Jersey Market, a Visit to Jersey Dairy, a Genuine Jersey Producer Tour, Wine & Chocolate Tasting at La Mare Wine Estate and Afternoon Tea at Bohemia.

There will also be special menus served over the course of the Festival at Michelin-starred restaurants Ormer and Bohemia and the Longueville Manor will serve lunch after a tour of the hotel’s own Victorian kitchen.

The Festival will launch on Thursday evening at David Hick Interiors at Six Roads in the company of popular food writer and editor Orlando Murrin, who will be demonstrating his culinary skills. Orlando is best known as editor of BBC Good Food, the launch editor of Olive Magazine and the author of five cookbooks. He was also a semi-finalist in Masterchef.

Orlando is currently helping to set up the BBC’s new ‘food hub’ responsible for creating all the recipes for BBC Good Food and their successful website bbcgoodfood.com. His cooking philosophy is that anyone can cook well – as long as you choose the right recipe and do what it says!

The Festival is being supported by Genuine Jersey, which promotes the diversity and quality of local produce and products.

Genuine Jersey Chief Executive John Garton said: “Jersey has a ‘grown not flown’ mantra about its cooking, and this Festival is all about celebrating all the culinary treats the Island has to offer. I would encourage everyone to have a look at the brochure – there is so much to do and so much delicious food to taste. Make sure you take this opportunity to enjoy the very best of Jersey.”

Orlando Murrin said: “My earliest food memories are from Jersey, where I spent my childhood, so it’s a great honour to return to the Island to take part in the Jersey Food Festival and to spend time eating and cooking the Island’s wonderful ingredients. On the mainland you hear a lot about ‘locally sourced food’ - usually referring to food that’s come from your region, which covers hundreds of square miles, but for an island on the scale of Jersey, this means so much more. I have been amazed by the imagination of local farmers and food producers, and the quality and range of their products. It’s a great story, and one that’s certainly going to get the attention it deserves over the next few years.”

The Festival brochure, listing all events, is available here or by visiting www.jersey.com.