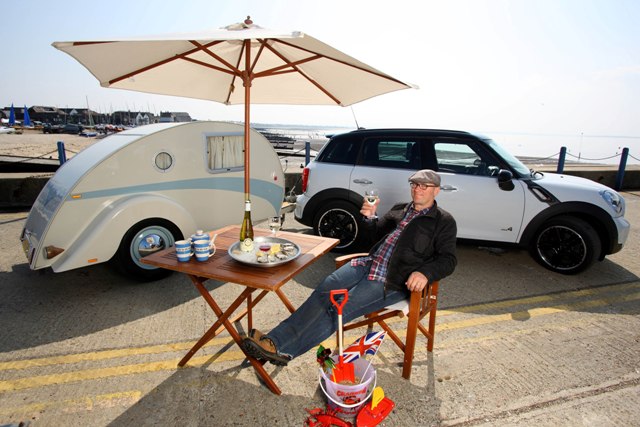 Date: 18/03/2013 | Posted by John Garton
Members of the Genuine Jersey Products Association are to feature in an episode of the popular ITV daytime television series, Ade in Britain, to be broadcast on 28 March.

Presenter Ade Edmondson - best known for his roles in The Young Ones, Bottom and the Comic Strip Presents – will learn how to make Jersey Wonders with David Dodge and Christophe Vaudry of Vienna Bakery. He also tangles with spinners Irene Dawkins and Maureen Mallet of Homespun and delves into turbot farming with David Cowburn of Jersey Turbot. He will also be cooking for the Band of the Island of Jersey, from his mobile kitchen in a classic teardrop caravan.

Now in its second series, the travel-cum-cooking show follows Ade Edmondson as he tows his caravan behind a modern Mini, on a cultural and culinary adventure around the British Isles. He stops off en route to explore local food and traditions, meets food producers and the enterprising individuals who are keeping traditional skills alive.

Filming took place last summer and the hour-long shows which began broadcasting on 11 March, are shown weekdays at 4 pm.

With new series of the Hairy Bikers and The Hungry Sailors also filmed in the Island in 2012 and due to be broadcast this year, Jersey’s reputation as a foodie destination looks set to be spread nationwide and in countries worldwide where the programmes are also screened.

The Chief Executive of Genuine Jersey, John Garton, said: ‘Television exposure on such a scale is great news for the Island, for the passion that local producers put into what they do and the quality seasonal produce grown here. We hope it encourages people to visit the Island and see – and sample - at first hand the fantastic produce and artisan skills that reflect the rich diversity of our rural economy.’

David Dodge is one of those passionate local producers and the proprietor of Vienna Bakery, a family-run business where the traditional skills of the master baker are combined with the techniques of a modern European bakery. Bakery manager Mr Vaudry showed Ade Edmondson how to make the Island’s traditional delicacy, Jersey wonders (les mèrvelles) - the rich twisted doughnut, shaped like a lover’s knot – at Vienna’s shop in the Central Market.

Mr Dodge said: ‘Programmes like Ade in Britain help showcase the fantastic diversity of regional food, traditional customs and skills, and the incredibly talented people keeping them alive. It was an honour to take part in the programme, to promote the Island and to share the delights of the unique Jersey Wonder with such a wide audience.’