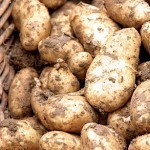 Charles Gallichan is the fifth generation to hold the reigns at the family farm in Trinity, since his great-great-grandfather, also Charles, started out in 1887.

Today, Woodside Farms, while remaining a traditional Jersey farm, grows and exports Jersey Royals, vegetables and flowers. Woodside Farm daffodils travel a long way, right across the Atlantic Ocean to the United States of America. In fact, this ever-popular traditional Spring bloom, reaches Boston - via air out of Heathrow - in about the same amount of time it takes to get them on sale in Scotland.

The American market is Woodside Farms’ second biggest customer after the large UK retail multiples. The daffodils are also exported to France - where they are a big hit with consumers, especially for La Fête des Grands-Mères, which falls on the first Sunday of March, and it is customary to give daffodils to grandmothers. And from France they travel farther afield throughout Europe.

In spite of its international appeal, Woodside Farms stays true to its firmly-established roots in supplying the supplying wholesalers and outlets across the Island. Jersey may only comprise 45 miles, but even within such a small area, growing conditions vary according to the soli type and seasons, so Woodside Farms has land all around the Island to maximise its growing potential.

In the peak growing season, it employs up to 130 workers, with the size of the workforce dropping to 50 to 60 according to the natural growing cycle, indoors and outdoors.