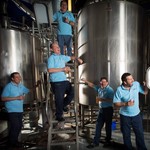 The Liberation Brewery, in one form or another has been a traditional ingredient of Channel Islands’ life since Queen Victoria was on the throne, so its award-winning beers brim over with genuine local flavour.

The brewery's beers are part of Jersey's rich history and heritage and brewing has continued uninterrupted even during the First World War and the German Occupation from June 1940 to May 1945.

In July 2014, the brewery struck gold when it won three awards at the British Bottlers’ Institute 2014 Awards, picking up a gold medal for its Liberation IPA.

The Head brewer, Patrick Dean, is a proud Jerseyman and his team at the brewery in Longueville use their expertise to ensure that every pint is not just a true taste of the islands but fresher than imported beers because of its local provenance.

For more information about the Liberation Group, the brewery, its award-winning ales and public houses - 44 in Jersey, 22 in Guernsey and two in Alderney visit: www.liberationgroup.com