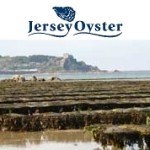 Jersey Oyster Company is part of the modern local aquaculture industry revival of ages-old Island traditions and food production. Archaeological evidence shows that oysters were eaten by Islanders 6,000 years ago, and were fished off Gorey, in what is now the Royal Bay of Grouville, throughout the Middle Ages. By the 19th century Jersey was one of north-west Europe's main oyster producers with an estimated two billion oysters exported to English markets between 1810 and 1871.

However, by the 1860s, over-fishing was having its effects, sending the industry into a terminal decline from which it never recovered - until the 1970s when aquaculture returned to the bay.

Jersey Oyster Company is owned and run by Chris Le Masurier, a third generation Jersey oyster farmer. His grandfather started an aquaculture business in the bay 40 years ago. Today the company is the largest oyster growing concern in the British Isles, farming some 35 hectares of the Royal Bay of Grouville, and exports over 700 tons of oysters a year with 80% being exported to France. The bay’s tidal conditions, that rise and fall twice in 24 hours combined with the shallow crystal clear water, create a natural filtering effect ideal for cultivating oysters - but not the indigenous ‘flat’ or native species of the 19th century boom. The company cultivates the rock or pacific oyster.

Whilst the majority of the oysters grown by the company are exported, the business also meets the demands of the local market with daily deliveries of oysters to the Island's fish merchants. This ensures that locals and visitors can enjoy some of the best natural produce the Island has to offer.

The company also produces mussels, grown on upright wooden poles, are known as 'Bouchot' mussels, these are harvested in the early summer and are exported to France.